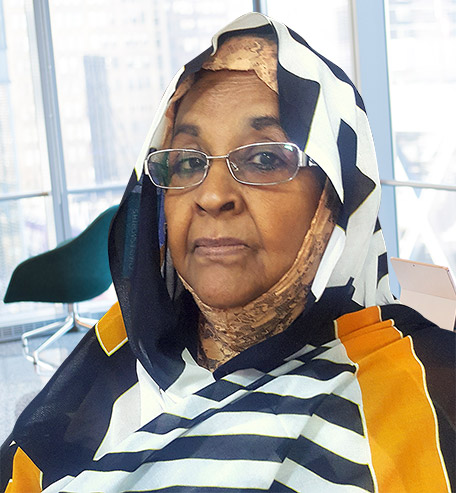 Fawzia El- Amin is the highly accomplished head of SCLO’s Energy, Natural Resources & Environmental law practices. She graduated from the Faculty of Law University of Khartoum in 1974, and then went on to join the Attorney General’s Chamber (Now the Ministry of Justice). Following, Mrs. El-Amin became a private practicing lawyer and oath commissioner until she re-joined the Ministry of Justice in 2002 to serve in the legislative and contracts sections, and then seconded to the National Electricity Corporation (NEC). From 2010 – 2011 she served as head of the translation department at the Ministry of Justice, and she was later appointed as the head of the legal administration in the Ministry of Water Resources, Irrigation and Electricity. In this role, she worked alongside the Nuclear Power Generation Unit and in renewable energy departments working on matters concerning contract negotiations and drafting.

Mrs. El-Amin was an associate member of a United Nations program held in Vienna concerning insolvency out-boundaries in 2010, and she represented the Sudanese Government in the course of drafting regulations regarding the first nuclear power plant in Sudan.  In addition she represented the Ministry of Electricity and Water Resources in negotiations with the People’s Republic of China in various transactions.  She has been an associate member of the Common Authority of the River Nile, and also was a member of the Pan-Arab Electrical Marketing where she represented the Sudanese Government in reviewing and revising the electrical interconnection sponsored by the Arab League and the World Bank. Currently, she’s acting as a member of the English version of the Sudanese laws volumes revision committee.